Trip Type (based on flights and accommodation):

Last year I visited the stylish little city of Copenhagen for a few days with a couple of friends.

We’d secured return flights for £35 in the Black Friday Ryanair sale so keeping in line with all things cheap, my friends suggested we stay in a hostel. I wasn’t too keen on this as I’d never stayed in a hostel until our trip and thought of them as dingy, smelly rooms in dilapidated buildings. Yeah it’s a reach but I’m a drama queen with an overactive imagination. Haha. Anyway, my friends convinced me that most hostels aren’t like that and the TripAdvisor reviews for some of our hostel options confirmed it too, so we ended up booking a private triple room at Danhostel Copenhagen City.

Upon checking in we were given towels and bed sheets for our room which left me a little bit baffled. You mean to tell me that we had to cover our beds ourselves?! Whew chile the ghetto. Lol just kidding. It was all new to me, so I had no idea what to expect. The room was equipped with 3 beds, a desk and a bathroom. Pretty basic if you’re comparing it to a hotel but standard for a hostel. Overall, we had everything we needed and we were only there to sleep so we were satisfied. Staying there also gave me the push I needed to booking a hostel for my solo trip to Vienna later on in the year.

So what did we get up to?

I don’t know what I was expecting but it wasn’t a tiny statue with splodges of dried up bird poo on it. Bearing in mind that this is one of Copenhagen’s most well-known landmark’s, I thought it’d be better maintained. Anyway, the story behind the statue is based on the fairy tale of the same name by the Danish author Hans Christian Anderson. It’s quite different to the Disney film adaptation as the original tale is slightly dark but interesting nonetheless. It’s up to you to decide if the monument is still worth a visit but hopefully this manages your expectations a bit 😂

I really want to say ‘if you know then you know’ but the purpose of this is to share my experiences so leggooo!

Freetown Christiania is a small community in Copenhagen that’s governed by its own rules and regulations separate from the Danish government. As soon as you enter you don’t even feel like you’re in Copenhagen anymore. If you’re from London and are familiar with Shoreditch and Camden, then I’d say that Freetown Christiania would be the offspring of the two. If you’re not familiar with those places, then imagine a hipster village with some colourful graffiti walls, murals and quaint little houses. There are no roads as cars aren’t allowed within the neighbourhood, so everyone gets around by foot or bicycle. You may also notice the faint smell of weed…which leads me on to ‘Pusher Street’, also known as ‘The Green Light District’. Weed is illegal in Denmark and has been for years but the sellers on Pusher Street aren’t too fussed about that. There are small stalls set up along the sidewalk and weed, hash, pre-rolled zoots, grinders, space cakes, edibles and all sorts of weed memorabilia is laid out for sale. Photos/videos of the street are not allowed and there are signs to warn you of this.

We spent the whole day in this unusual neighbourhood; eating in cafés, exploring, admiring the numerous pieces of artwork and taking pictures. There was such a chilled vibe and a bohemian/hippy feel to the community which was a nice contrast to the cosmopolitan vibe of Copenhagen city centre.

Our hostel was conveniently only a 5 minute walk away from this amusement park which is the second oldest in the world. A quick google search before booking our flights would’ve told us that it would be closed for the season at the time of our trip. Can you imagine our disappointment when we headed towards the park only to be greeted with signs that it was closed until February? Sigh. We only had ourselves to blame.

Did you really visit Copenhagen if you didn’t visit this colourful waterfront? It’s a charming area with loads of cosy restaurants and old sailing ships on the canal. As it’s a very popular attraction, you’ll find that there’ll be a lot of tourists there no matter what time you go. Here’s some history behind the place – it was built in the late 17th century as a gateway from Kongens Nytorv (King’s Square) to the harbour. It became a place for the world’s ships to dock while in Copenhagen which resulted in it becoming a playground for sailors and prostitutes. As a result, the port split into two parts – one ‘naughty’ side and one ‘nice’ side. Cheeky eh? This is no longer the case as the whole of the port is pretty ‘nice’. You can clearly see this just from the pedestrian bridge at the end of the canal which is covered in hundreds of personalised padlocks left by loved up couples. 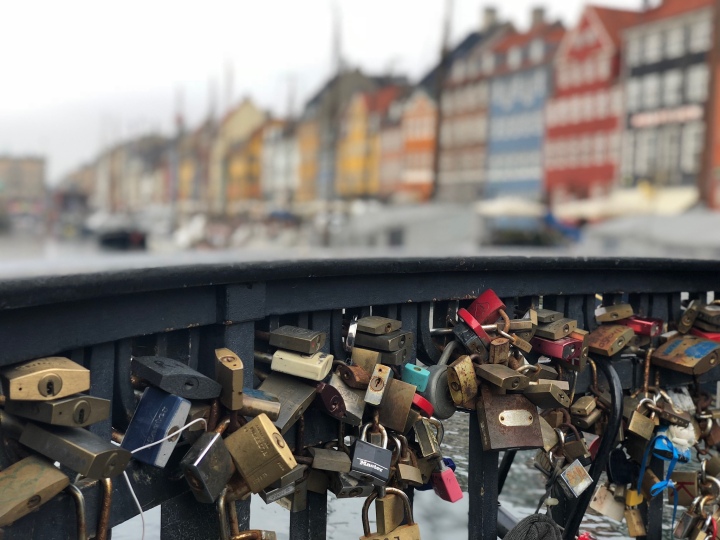 This is a small marble baroque church that was built in the 18th century. The interior is gorgeous and we stayed there for several minutes to admire the rococo architecture and say a few prayers.

If you’re into art and design, then this might be the museum for you. The galleries were laid out beautifully and everything was well organised and informational. You can expect to see everything crafty from fashion to jewellery to household items to furniture. At the time of our visit the featured exhibition was called, ‘I Am Black Velvet’. It was a display dedicated to Danish designer Erik Mortensen, the head designer of the French fashion houses Pierre Balmain and Jean-Louis Scherrer from 1982 to 1995. We saw some of his beautifully made and dramatic haute couture pieces from old catwalk shows and learnt a bit about the legacy of Balmain.

On our last full day in Copenhagen, we decided to visit Malmö which is a coastal city in Sweden. It took us 40 minutes by train to get there from Copenhagen Central station and we paid around £20 for return tickets. The train took us right into Malmö city centre which was great for us because it meant we could do some sightseeing.

If I’m being completely honest Copenhagen is probably one of my least favourite cities that I’ve been to so far. Things got a bit boring after a while so I personally feel that 2 days is more than enough. I’m not one to sugar-coat things and I like to be transparent and honest with my posts so that you can get a feel for my experience as best as you can. Part of the experience being a let-down may have also been due to me not being prepared for just how cold Copenhagen would be.

On the first day out, I realised my Converses were not suitable walking shoes and the socks I was wearing weren’t thick enough because after just 30 minutes of being outside, my feet became numb. That was poor planning on my part as I should’ve packed appropriate clothing in the first place. With that being said, I was with some friends who made the trip enjoyable and there were tonnes of laughable moments. Visiting the quirky neighbourhood of Freetown Christiania was also a great highlight!

Would I go back? Yes. I still want to visit Tivoli Gardens so I’d probably do a day trip at some point in the future.

As always, thanks for reading and peace, love and flights.

I'm Tolu, a London based content creator with an immense love for all things travel.

If you're into affordable luxury travel and style then you've come to the right place as you'll find loads of tips/resources and posts of some of the experiences I have had whilst travelling.

I hope you find my blog useful and it inspires you to get out there and immerse yourself in some of the extraordinary cultures the world has to offer...